To start, Happy New Year everyone! Welcome to the Thunderdome…I mean, 2019!

News on my end is that my story “With These Hands: An Account of Uncommon Labour” has been reprinted in the January 2019 issue of Apex Magazine! You’ll be able to read it online on January 24, but you can get a copy of the issue at any time. You know you wanna. I mean, look at this beautiful cover by artist Tangmo Cecchini…

You can also find stories by Beth Dawkins, Lavie Tidhar, Marian Coman, Aja McCullough and an essay by Daniel M. Bensen. Check them out!

It’s that time of the year and I have works that are eligible for 2018 science fiction, fantasy and horror awards (such as the Nebula, Hugo, and Stoker) this year. Oooo! Ahhhh! I am hyped. I really do hope that you’ll consider them and add them to some lists!

Short Story: “With These Hands: An Account of Uncommon Labour”
FIYAH Magazine, Winter 2018 (Issue #5: “Ahistorical Blackness”)
As the symbol of a new country is constructed, all is not what it seems.

Inspired by a painting and informed by history itself, this story is currently on the Nebula Suggested Reading List and was chosen by Jason Sanford as one of the “Best SF/F Short Fiction, January through June 2018.” Here are some more reviews about it: “Weekly Fiction Rec Roundup 6” by Jeff Xilon and “Quick Sips: FIYAH #5 (Ahistorical Blackness)” by Charles Payseur. (And psst…”Labour” with a “U” in the title is intentional. It was also published like that as well as it is set in the 1790s.)

Novelette: “Peregrination” (co-written with Chesya Burke)
Chiral Mad 4 (Written Backwards), October 2018
Editors: Michael Bailey and Lucy A. Snyder
What makes us special. What we will do to protect the ones we love.

There’s dimensional plane-jumping and spending a little time in the void. Not to mention a twist on what constitutes family (especially when they aren’t quite…human) and the lengths to which they will go. All set during the Red Summer of 1919. Check it out!

And please consider Chiral Mad 4, the groundbreaking anthology that it is a part of, too: four short stories, four novelettes, four novellas and four graphic adaptations–all collaborations. It is seriously something!! More info about Chiral Mad 4 can be found at https://blog.nettirw.com/2018/10/19/chir4l-mad/ or by contacting editor Michael Bailey.

Wrong place. Wrong time. Or was it? I always enjoyed those “Take a hint, run!”-type stories and had a blast writing one myself. I hope that you will enjoy and consider it too.

The Black Magic Women anthology is also eligible for awards as well. If you are a juror and would like a free eBook of it please email editor Sumiko Saulson at sumikoska@yahoo.com. For a hard copy, contact publisher Mocha Memoirs at mochamemoirspress@gmail.com.

Thank you for considering my work!

At some point I’ll talk more about the fact that I’m a historian, but for right now I’ll talk about how being one brought my story “With These Hands: An Account of Uncommon Labour” into being.

A few years ago, I worked at the White House Historical Association and they had a small exhibit of paintings by artist Peter Waddell, who specializes in historically accurate works about historic architecture and events. One of those paintings, “A Vision Takes Form,” is about the construction of the White House. In the lower part of the painting were two Black laborers. I thought “There is a story there…”

It was published in FIYAH Magazine’s “Ahistorical Blackness” issue and recently, author Jason Sanford including it in his list of what he thought was the “Best SF/F Short Fiction, January through June 2018.” I’m in some seriously good company! Please read and consider “With These Hands” in the future if you get a chance.

Then I found out it made the Nebula Awards Suggested Reading List! What?! For all of you jaded folks out there, it’s my first time so I’m pretty damn hyped. HYPED, I tell ya. Even if it doesn’t make it any further (although I sure do hope that it does), it just makes me feel good and like I’m not toiling in absolute obscurity.

I’m just going to leave you with this document. It is a 1795 work for hire document from the National Archives for a laborer (and yes, the “U” in my full story title is intentional) at the White House. George was for hire, but was actually enslaved. All I could think of while writing my story were dreams of freedom and what it meant to be free…

In addition to fantastic stories, essays and interviews every month, FIYAH releases a Spotify playlist in conjunction with the issue. The FIYAH team asked us to contribute three songs that complement our stories. I don’t know about anyone else, but I sat there for a moment like “Whoa…” as I hadn’t thought about it before. And I’ll be honest, I really enjoyed every minute of trying to decide.

I thought about my story’s themes and decided upon the main ones: freedom, dreaming, beginnings, creating. The lyrics of the songs themselves were also very important. Without telling you much more (you’ve gotta read “With These Hands” for yourself!) I went with Nina Simone‘s “I Wish I Knew How It Would Feel to Be Free”: “I wish I could live/Like I’m longin’ to live/I wish I could do/All the things that I can do/Though I’m way overdue/I’d be starting anew.”

The third song I chose, “Golden” by Jill Scott, has always felt like a celebration of self to me: “I’m taking my freedom/ Pulling it off the shelf/ Putting it on my chain/ Wear it around my neck…”

But the first one, “Fantasy” by Earth, Wind, and Fire, is a true love for me. It is one of the first songs that I ever knew in my life. I sang a part of it (“It’s your day/ shining day/ all your dreams come true”) to my baby when he was born. Its beautiful, hopeful lyrics have always spoken to me of dreaming, freedom and faraway places: “Come see victory, in the land called fantasy/ Loving life, a new decree/
Bring your mind to everlasting liberty.”

Enjoy the playlist and issue and support the hard work of the team at FIYAH by getting a subscription already!

I am absolutely thrilled to announce that my short story “A Little Not Music” will be in Sycorax’s Daughters (Cedar Grove Publishing), an anthology of Black women horror writers. Out in February 2017, it is edited by Kinitra Brooks, Linda Addison, and Susana Morris.

“A Little Not Music” is set in 1939 Washington, D.C. Its protagonist, a young dancer at the popular club Crystal Caverns (that’s an actual ad for it above!) is dealing with…well, you will have to check it out for yourself! 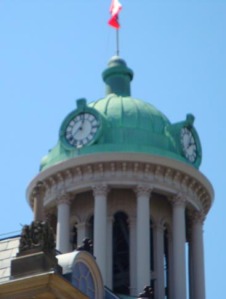 The pic at left is of Toronto’s St. Lawrence Hall–an important site in the Canadian abolitionist movement. The Anti-Slavery Society (founded in 1851) invited lecturers such as Frederick Douglass to speak there and the North American Convention of Colored People met here.

I was in Toronto since a very good college friend of mine–now a professor at the University of Michigan–was attending a symposium entitled “Tales of Slavery: Narrative of Slavery, the Slave Trade and Enslavement in Africa.”

Since my best friend (his wife) and I are writers, he thought we would enjoy a panel on “How Novelists Construct Past Slaveries.” He was right. Given that two of my published stories involved slaves, I was absolutely fascinated. Moderated by Kofi Anyidoho of the Univ. of Ghana, the panelists all spoke on their challenges, inspirations and realizations as they tried to turn history into a story. The panelists included African-Canadian author Lawrence Hill (The Book of Negroes, US title: Someone Knows My Name); South African authors Manu Herbstein (Ama, A Story of the Atlantic Slave Trade) and Yvette Christanse (The Unconfessed); and historian Natalie Davis (Fiction in the Archives, Slaves Onscreen, and Women on the Margins).

I found Mr Hill’s and Ms. Davis’ papers and answers during the Q&A to be the most compelling as I know the feeling of how going through an archives and reading things like lists can get you hyped and trigger questions that become inspirations, such as “Who were they? What were their lives like? What are their stories?”

I also liked Ms. Christanse’s honest answer to a question of “Can anyone write the story of another culture?” Her take on it was that in theory–yes–but there are certain stories that she’d be nervous about taking on, such as that of a Jew during the Holocaust. Chesya and I debate this question constantly, as, is it a matter of “appropriation”? Or as writers, shouldn’t we be able to write about anything or anyone if the facts are straight and the voice is true? That’s a whole other post for another time though.

Having been a history major myself and considering that I write historical fiction, I could see one problem if a historian wishes to create a work veering more towards creative writing than not. A comment was made about “Wondering what other historians would think.” I remember muttering, “We don’t necessarily care what you think. Who are you really writing for?”

Don’t get me wrong. No writer ever wishes to have their facts incorrect or to misinform others, but a creative writer is not the same as an academic writer. We can take some liberties where a historian writing a more non-fiction or scholarly work absolutely should not. We are not writing for scholars, we are weaving a story for the reader and there’s nothing worse than reading a novel that is just a stringing together of the author’s research notes. While I believe historians have the capability to write an engaging story, they have to be able to be skilled enough as a storyteller as well.

History is a great inspiration for fiction, without a doubt, but to make it come alive…one can’t forget the “story” part of it.

histories, images, ideas, opinions, and what inspired them.

Musings at Tonya Liburd's quirky corner of the web.

WRITER Of SPECULATIVE FICTION & OTHER STUFF

The Musings of a Disgruntled Haradrim . . .

HAVE A PLAN TO VOTE

The Worlds of Nicole Givens Kurtz

The man your librarian warned you about...